You’re offline. This is a read only version of the page.
SIT Learn
Join our mailing list to receive updates on upcoming courses.

1.1
SIT alumni (SITizens) are eligible to receive SITizens Learning Credits of SGD2,000 as long as they have graduated with a degree from any of the undergraduate programmes offered by:

(a)
Singapore Institute of Technology.

(b)
Joint degree by Singapore Institute of Technology and Overseas University partner.

(c)
One of Singapore Institute of Technology’s Overseas University partners.

2.3
SITizens Learning Credits can only be used for self-sponsored course applications.

2.4
SITizens are not eligible for any form of discount(s) namely, early bird, members’ discount etc, offered by SITLEARN Professional Development if SITizens Learning Credits are used for course application.

2.5
Acceptance of payment by SITizens Learning Credits is at the sole discretion of Singapore Institute of Technology.

2.6
SITizens Learning Credits cannot be exchanged for cash or be transferred to another person.

2.8
All course applications using SITizens Learning Credits will be subject to the terms and conditions of course registration, which are stipulated at the point of registration.

2.9
In the event that SIT cancels the course after the course application is accepted, SIT will make full refund of SITizens Learning Credits that were used for payment.

3.2
SITizens shall pay any balance course fees online by credit card or debit card or internet banking (or other payment mode acceptable by SIT) if the SITizens Learning Credits have been fully used.

4 Use of Personal Data

4.1
SIT may collect, use and disclose personal data that a SITizen provides during the activation of SITizens Learning Credits for the following purposes:

4.1.2
Informing the applicant of any news, information, and promotions relating to SITizens Learning Credits.

4.1.3
For the use of any online services available at any SIT’s websites and/or through other telecommunications channels relating to SITizens Learning Credits.

4.1.4
Applicants may withdraw their consent for one or more of the above purposes at any time by informing SIT.

Please sign in using one of the below methods to continue.

Towards Food Innovation, One Small Batch at a Time
Jointly launched by SIT, Enterprise Singapore and JTC in April 2022, FoodPlant, Singapore’s first shared facility for small-batch food production, has garnered interest from various food manufacturing players. One of them is SGProtein, a Singapore-based meat analogue manufacturer, who has partnered SIT and FoodPlant since 2021 through a series of student projects, Continuing Education & Training (CET) courses and manufacturing collaborations.

It was a productive session. “We ran 10 different ideas within one day on a small capacity,” said Co-Founder and Chief Executive Officer of SGProtein Mr Dominique Kull.

This was possible only because they were testing their ideas at FoodPlant, a new small-scale food manufacturing facility located within the JTC Food Hub @ Senoko.

Launched in April this year with a vision to provide food manufacturers a space to test new products in small quantities at a lower cost, FoodPlant is a first-of-its-kind shared facility for small-batch food production in Singapore. The facility is fully licensed by the Singapore Food Agency, and is fitted with state-of-the-art food machinery such as an extruder, a retort machine and a spray dryer that costs over a million dollars. It has eight production rooms, three preparation rooms and one analysis room.

FoodPlant is a collaboration by the Singapore Institute of Technology (SIT), Enterprise Singapore and JTC.

By using FoodPlant’s pilot-scale extruder, SGProtein is able to produce just 10kg of each of the 10 ingredients and recipes per hour. By comparison, their own industrial extruder runs between 300 and 500kg per run.

Dr Lim Bee Gim, Chief Executive Officer of FoodPlant, said that the small-batch facility can produce sufficient quantities to help SMEs test their products’ commercial viability after conceptualisation before making the leap to full-scale productions. At the same time, it gives food manufacturers like SGProtein the capacity required to test new ingredients and recipes on a much smaller scale.

“This will facilitate their research and development of proof concepts prior to scaling up in their own industrial-scale plant,” she said.

As Singapore moves towards its ‘30 by 30’ vision -- where 30 per cent of the country’s nutritional needs are produced locally -- SGProtein is looking to play its part in this national effort.

The company has set a target: to produce 12,000 tonnes of alternative proteins a year.

It is a bold undertaking, but SGProtein is inching closer to its goal with FoodPlant. The food manufacturer can trial new products in small batches, test them out in the market, and solicit early-stage feedback.

Mr Kull sees SGProtein’s goal as a necessity to strengthen Singapore’s food supply. For Singapore to reach its food security goals, “we need to start building up the agri-food industry’s capability now,” he said. 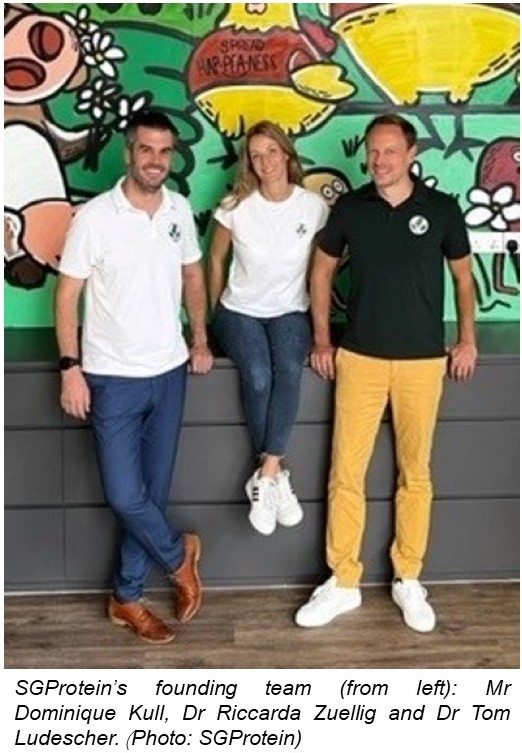 This desire to make food systems more sustainable was what led Mr Kull, who previously spent over 20 years at Bühler Group, a global specialist in food processing technologies, to set up SGProtein together with Dr Riccarda Zuellig and Dr Tom Ludescher.

Dr Zuellig, Co-Founder and Chief Operating Officer of SGProtein, added: “With the increase in global population size, the world needs alternatives to what we eat now. These alternatives should be healthy, locally produced, available for everyone and, of course, very tasty.”

Apart from offering small-batch production services, FoodPlant, in collaboration with SIT, also conducts CET courses. The courses are offered under SITLEARN Professional Development, the lifelong learning arm of SIT catering to professionals. The courses are conducted by SIT faculty and thought leaders, with input from industry experts. The aim is to help those working in the food manufacturing space gain a deeper understanding of existing and emerging technologies.

Participants from the HMET course underwent a mix of theory and hands-on learning to better understand the extrusion process. (Photo: FoodPlant/Lim Bee Gim)
“It was good to meet like-minded professionals interested in the extrusion technology, relearn the basic rules of extrusion and receive hands-on training with a small-scale extruder,” said Dr Zuellig.

“The two-day session was well-structured and provided insightful information on the emerging technology. The course content broke down the complexities of the technology, which involves texturising plant-based proteins into viable meat alternatives, into digestible information,” Dr Zuellig added.

FoodPlant’s collaboration with SIT has also opened doors for SGProtein to work with young talents and tap their minds.

Last year, SGProtein collaborated with SIT’s Food Technology students to research the value of incorporating moringa and seaweed in meat analogues. “We were involved in the student project to analyse how alternative and local ingredients could enhance nutrition, texture and flavour of the alternative meat product,” said Mr Kull.

SGProtein is now working on the possibility of recruiting students embarking on their Integrated Work Study Programme (IWSP) to work at their facility. Mr Kull noted that it is a win-win arrangement – the company can provide students with practical knowledge in the field, while gathering fresh ideas and insights from them.

“I think it's very important to have such exchanges to allow students to see what they learned in university being applied in the field, and also for us to see what's the newest trend in the research side and bring that into our practical approach,” he added.

This article was originally published on SIT's Digital Newsroom.